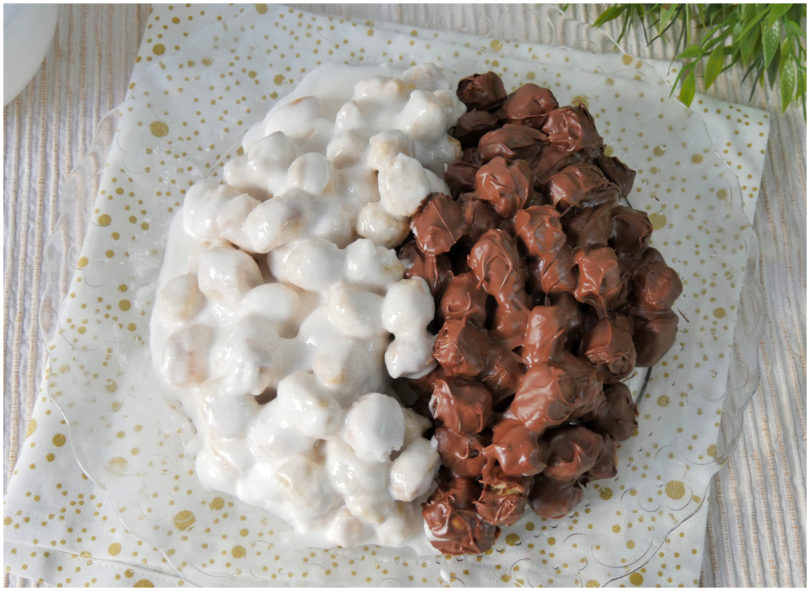 The pignolata messinese is, as you may have guessed, a dessert of Sicilian origin. The basic recipe is somewhat reminiscent of the Neapolitan struffoli. The main difference, in fact, lies precisely in the coverage, which in the struffoli is honey-based while in the pignolata it is made with a glaze, partly with chocolate and partly with lemon. The end result is a real delight, for the eyes and the palate. As always when it comes to regional recipes, I found various recipes on the net and I simply opted for the one that inspired me the most, but suggestions and suggestions from Sicilian friends are welcome;)

How to make the fussy messinese

Put flour and sugar in a bowl, mix, then add eggs, grappa, yolk, lemon peel and softened butter.
Work until a smooth and homogeneous mixture is obtained, then cover with cling film and leave to rest for at least 1 hour in the refrigerator.

Take back the dough, rework it briefly to soften it a little, then form long cylinders, about 1 cm in diameter, and cut them into pieces of about 2 cm.

Fry the pieces of dough in hot oil, not too many at a time so that they do not stick together and stirring occasionally to brown them evenly.
As they are ready, drain them with a slotted spoon and let them dry on kitchen paper, then let them cool.

In the meantime, prepare the two glazes.
For the lemon glaze: whip the egg white with sugar and lemon juice until a fluid mixture is obtained.
For the chocolate glaze: chop the chocolate and melt it in a water bath or in the microwave.

At this point immerse half of the struffoli in the lemon glaze and the other half in the chocolate glaze, mixing both (separately) to distribute them evenly.

The pignolata messinese is ready, you just have to arrange the two compounds on a serving plate, side by side, let the glaze thicken for half an hour in the fridge and serve it.